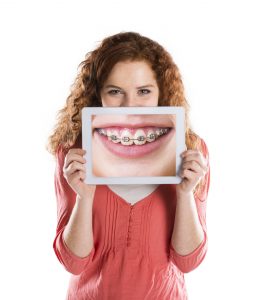 In the past, braces were primarily used for teenagers or young adults who wanted to start their adult life with straighter teeth and a brighter smile. Because of the traditional wires and metal brackets, people who already started their careers were less likely to want standard braces on their teeth.

But today, career people can straighten their teeth without having to worry about the embarrassment of wearing braces. Invisalign offers the same benefits as braces without the cumbersome brackets and wires, making it a better option for many working adults.

So far, more than one million people have enjoyed the teeth-straightening benefits of Invisalign. And that number is growing every day.

Invisalign is based on the same principles of traditional braces, using consistent pressure and frequent adjustments to gradually straighten teeth. But they are made from a transparent thermoplastic material so that nobody has to know you are even wearing braces.

People using Invisalign will typically wear their aligners for between 20 and 22 hours per day. The aligners are then adjusted about every two weeks so that the teeth are incrementally moved into the proper position.

The amount of time a patient will need to wear Invisalign aligners will depend on their specific teeth straightening needs. More severe cases may take longer than less complicated treatments.

Generally, Invisalign takes about the same amount of time to treat and correct teeth as traditional braces, but the amount of time you require will depend on your specific needs.

Because both Invisalign and traditional braces are based on the same principles, they both have the same level of comfort due to the consistent pressure on the teeth.

If you already have a career and don’t want to have to deal with the wires and brackets of traditional braces, consider having your teeth straightened using Invisalign.